Review of Vampire Academy Book 1 and 2 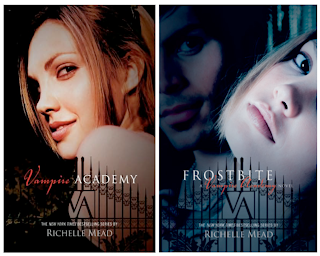 I finally got up and read the first book in the Vampire Academy Series. I soon followed reading that one by Frostbite. I had won a signed copy of Vampire Academy by a blog contest.So its been on my shelf for about 3 months , give or take a few weeks. So I was takling to my friend Natalie and she asked if I had any good books she could read.  I gave her the Vampire Academy first book and she soon fell in love with Richelle's writing and said I should most defiantly have to read this book. So I picked it up the next day on my way to school and finished it by 6th period.
But enough of me ranting... It is time for the review of Vampire Academy and Frostbite.

St. Vladimir’s Academy isn’t just any boarding school—it’s a hidden place where vampires are educated in the ways of magic and half-human teens train to protect them. Rose Hathaway is a Dhampir, a bodyguard for her best friend Lissa, a Moroi Vampire Princess. They’ve been on the run, but now they’re being dragged back to St. Vladimir’s—the very place where they’re most in danger. . . .
Rose and Lissa become enmeshed in forbidden romance, the Academy’s ruthless social scene, and unspeakable nighttime rituals. But they must be careful lest the Strigoi—the world’s fiercest and most dangerous vampires—make Lissa one of them forever.

Both of these are eyecatching novels and really are a piece of work. Rose is immature in the first book but in Forstbite she is starting to finally grow up- slightly. Rose is always flirting but Dimitri Belivoski is always finding out where she is and stopping her from doing something she will regret.
It had a good start and I can not wait to see how the series progresses. With all the characters and of course our Christian and  Lissa..
Posted by Courtney Wyant at 6:29 PM