Review of The Pull 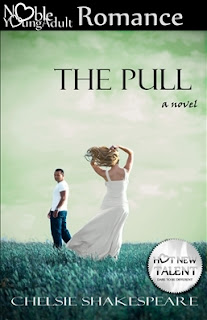 Evie Remington had always done what people expected of her. As a result, at twenty-six she finds herself the unhappy owner and manager of a Denver hotel. That is, until deep-rooted memories of a past life and the hidden knowledge of a promise she made in that other lifetime pulls her away from it all. Without knowing where it will lead, Evie sets out on a cross-country journey that will challenge what she believes about life, death, and love


I got this book from the author for review. So I really enjoyed the plot it was different and fun. It was a little different than the Young Adult books we usually read where the main character is a teenager. This one is one where all of the characters are mid 20s.
So yes it was a different story but it had something I haven't really read a book on yet. Reincarnation. Yes, it was a good story and had a good ending but what left me heart broken was Kyler.

The poor boy had a fling with her and then she just leaves him.. The only good thing I fond when she left him is that he is now free to date who ever... cough cough...hint hint..... So here is what I got from the characters themselves:


Kyler: Aww... I felt like crying for the poor guy when Evie leaves him. I just couldn't believe her. Though she had someone waiting for her in Colorado she left him after  making us fall in love with him. Or atleast I was falling for him. His appearance I believe is brown hair and always dressing comfortable, yet stylish. He is also in college, so I am assuming he is younger than Evie.


Evie: The girl this revolves around. She is still grieving the lost of her dad the whole time while she is on her road trip across the country.She is one of the people that constantly dream and have visions of the people, she and her soul mate. had reincarnated from. So she is constantly having dreams of a man named Jude and a girl named Bria, which is actually her. So she isnt a whinny character that feels sorry for herself constantly. She is the kinda person who goes and finds what she is looking for even though she has to go all around the country to find it. In this case right back where she came from. I believe her appearance was 5 and somewhere between 5-9 inches, blonde hair, and thin. I am not for sure all the way though.


Audrey: I couldn't pass doing the characters with out doing Aud.. who spent 3,000 dollars on a fish tank-just the fish tank and then a whole other buggy filled with decoration and fish. She spent a small fortune on fish.... These people in these books must have some money to waste because Evie traveled around the country buying clothes at some places, They must have some money.

Easton: He is about Evie's height and he also has the dreams. He stays at the hotel where he knows he is suppose to meet Evie...  He was a likable character but I still liked Kyler more


Review itself:
All together I really enjoyed the book and the author had me captivated the whole time so that was great. There was a few things that could have been better like ,telling me when Easton's POV came in and when Evie's does, but that was only a minor set back. Also I was kinda pulled back how Easton and Evie's relationship just sky rocketed with him  kissing her before anything else. It would have at least been civil to say "Hello, I'm Easton and I have been having  dreams of you for  a long time. I love you" and THEN kiss her.  That is just Courtney's input nothing that is affecting anyone


Also I was joking with the author, Chelsie, and told her that when looking up "  reincarnation and science"  on google you get 8,100,000 results than the 7,900,000 she put down. I just being the OCD person I am looked it up and saw that. I thought it was funny that the results in Google changes that fast.
So I say go out and buy The Pull if you are looking for a good ebook that isn't over-priced. It most likely wont disappoint you as it didn't me.