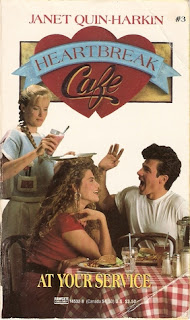 Title: At Your Service
Series: Heart Break Cafe (#3)
Author: Janet Quin-Harkin
Summary: (Bare with me because I'm writing the summary because it isn't on Goodreads, and I misplaced the book.) Debbie Lesley is the only waitress at the Heartbreak Cafe and she wouldn't have it any other way.  But everywhere around her is crumbling.  Her mother and dad are divorced, and her Mother is talking to some creep.  Joe Garbarini's, the co owner of the cafe, girlfriend is turning into a total snob and taking the only other help she has away from the business.  So when things kick up in the kitchen and Debbie drops a hint that she needs some help it all turns to chaos as Joe hires his girlfriend Wendy to help.


So, that was my attempt at trying to write a summary. Let's be honest, I'm never going to get a job as a summary writer because I want to jam pack things that aren't even main ideas into the summary and leave out all the important information.  But enough of me talking about my lacking talent in the summary writing business, on with the review.

So, I ended up picking this book up at a thrift store with the deal of 10 books for a $1.  So  I picked this one, some Laurlene Mcdaniel, and some other 80-90's books.  And I have heard good things about The Heartbreak Cafe series, so I was super excited when I saw this one so I snatched it up quickly!  Boy was I glad I did, this one was another one of the not so amazing writing but it was still cute kinda books.

So, the third in the series At Your Service dropped us into a little cafe in a little beach town. With Debbie as the only waitress, and cook for the matter at the cafe to do everything.  She had recently broke up with her boyfriend, Grant, and was glad to be free of him.  He was the shy, quiet type and that just wasn't what she  was looking for.
So, Debbie, I liked her as a character although sometimes (as usual) I got a little annoyed with her acting so immature.  Like when her Mom brought a date home she acted like my 4 year old sister would have, and would have g otten her tale whipped.

And her best friend Pam, I really enjoyed. She was a real  life like character.   She ended up being peer pressured into the wrong crowd. She did some things she was not proud of.   I know the pressure of being great.  Getting the good grades, but I never, ever hang out with the wrong crowd. But she isn't so lucky, even though Debbie is telling her not to go down that path.

So Pam finally comes to the light, and thankfully in time before she does something stupid that she will regret in the future.

And then there was Wendy, the mean, stuckup, jerkface girlfriend.  May I punch her in the face?  Please?  She is the a-typical b-word girlfriend that you read about in books.  She kinda reminds me of the mean girl in Taylor Swift's You Belong with Me.

Another clique book to add to my 80's collection, but maybe that is why I love them so much.  They are so cute, innocent, and light-hearted.  I think all of us need that kind of romance every now and then.  Don't you agree?

Posted by Courtney Wyant at 7:45 PM